Professor Sharpe on his way to class in the Spellmann Center.  Photo by Kelby Lorenz

He storms into the classroom of Mass Communication Theory with a large cup of coffee in his hand and his briefcase dangling from his shoulder. Instead of saying “Good morning,” Bill Sharpe simply grunts.

His students smirk, because they know they are about to hear another story about his life and daily encounters, told with a form of grumpy sarcasm that is unique to the communications professor.

Known for his storytelling inside a classroom, perhaps it was only a matter of time until Sharpe published his first book, “Death by Lethal Affection,” due to come out on Amazon at the end of April.

“It’s a crime story with a twist,” Sharpe said. “Girl meets boy, they fall in love, they get married, and then it’s just murder.”

Ever since his father read his beloved Raymond Chandler and Dashiell Hammett novels to Sharpe as a young boy, he said those have always been his favorite.

“I just fell in love with detective stories,” said Sharpe with a sarcastic grin. “I own several trench coats.”

Sharpe grew up in the world of film, as his father was the head of public relations at Paramount Pictures in St. Louis. He said he discovered his passion for writing early on.

“It seemed like it was a God-given talent,” he said. “I don’t think that I was impressing a lot of people with my prose in school, but if I was writing about something I liked or cared about, I did a better job.”

With an Irish mother and Scottish father, he experienced a close family bond.

“I come from a middle-class family where work ethic was a big deal,” he said. “My father was one of those who said that nobody is going to give it to you, you’ve got to go out there and get it on your own.”

That work ethic seemed to have stuck throughout his life as Sharpe assembled a long list of jobs, ranging from covering politics, college sports play-by-play, coaching basketball teams and being an editor of a magazine, to owning his own production company, BearhounD7.

“My sister and I were raised to be very independent, but it really took with me,” Sharpe said. “I’ve always had three or four jobs. I liked being really busy, and I still do.”

In addition to teaching part time at Lindenwood, Sharpe also serves as an adjunct professor at Webster University, his alma mater.

He said that teaching gives him the opportunity to pass everything he learned in life on to his students.

“While his lectures are long, his real world experience is shown through the stories that he tells us, instead of the homework that he assigns,” said Adam Heineman, Lindenwood communications student.

Long before launching his teaching career, Sharpe graduated with a degree in political science and public policy analysis from Webster in 1976.

He finally dove into the world of theater and scriptwriting when he decided against a master’s degree in law, and for a degree in theatre and communications at the University of Michigan.

“There was a time where I wrote a mystery play every week,” he said. “That’s how I learned how to write scripts… and all the ways you can kill a character,” he said.

However, the idea of writing a novel was still frightening.

“I thought I can’t write a novel, I don’t have the mental discipline to write 500 pages of anything,” said Sharpe. 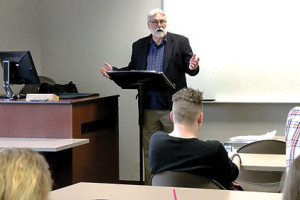 It wasn’t until he pursued his master’s degree in creative writing at Lindenwood in 2013 that he finally felt that spark.

According to Sharpe, Lindenwood professor of digital cinema arts Peter Carlos played a big role in the process, not only as a friend, but especially as mentor and scriptwriting teacher.

“He was a student and colleague at the same time,” said Carlos. “It was a little difficult for him, but I was able to push him to his limits.”

Soon enough, the idea for the novel finally came along.

After George pushed him to edit it down to a final version of 6,000 words, he proposed the idea to Sharpe to turn the the story into a novel.

“I was afraid, it was absolute fear,” said Sharpe. “Then I thought about what I tell [my students], and it’s to always take chances and not be afraid.”

When he finally sat down and started writing, he said that suddenly, something kicked in.

He said he knows this sounds like a schizophrenic process, “and it is, and that’s how it works for me.”

With the sequel, “Justice Delayed,” already in the works and due in October, Sharpe is eager to explore his new-found passion even further.

View more posts from this author
« Origin of the BearhounD Stories